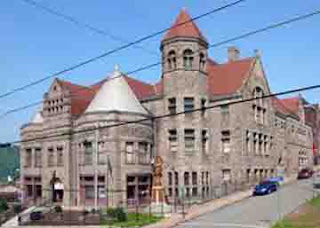 The Braddock Library was funded by Andrew Carnegie in the 1889 for the workers at the Edgar Thomson Steel Works as a place for the workers and their families to have an easier and more enjoyable life than their work environment.  The Music Hall, Pool, and Gymnasium were added in 1893. At a time when few homes had indoor plumbing and a bath was a rarity, this was the place where employees could come to shower or bathe, take a swim, enjoy a book, play billiards, and get a haircut. Credit to Wikimapia and more information about this at:
http://wikimapia.org/581369/Braddock-Library
A few years ago, Dick Wukich, a potter and professor at Slippery Rock University, became involved in promoting a project to bring the arts to the residents of the Braddock area.  Funds were secured and Jeff Schwarz, Jason Pascuzzi, Tom Gaudi, and Richard Miller, also potters, became involved, and with the support of the library management and later Vicki Vargo, the Director of the Braddock Library, converted the former baths and furnace room in the basement into a pottery.  Many other people helped and if you know who they are, you can give credit to them in the comments area which follows this post. 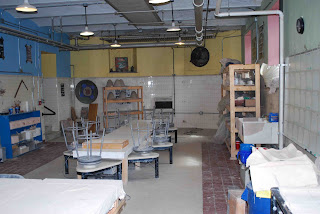 There are 10 potters wheels in this room which is used by both children and adults in both organized classes and open studio.  Fees for adults are very modest and children can receive materials and instruction for free.  Jeff supervises the studio and does not receive a salary for doing so.  He is assisted by Denny, Justin, Bob, and KT in keeping the place humming and the work moving through its cycles. 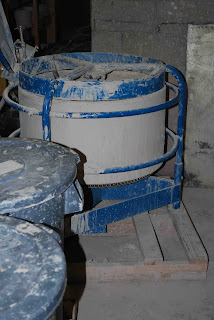 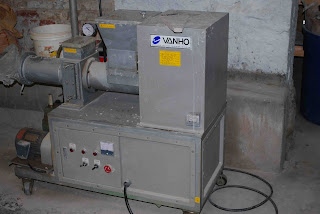 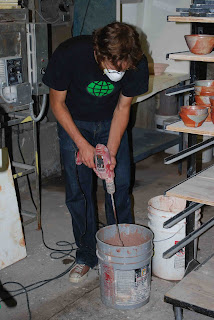 There is a glaze mixing area with a well organized set of chemical bins.  Denny is mixing glaze for the studio with a power mixer.  Justin was also there weighing out the chemicals.

The is the glaze test area and a ware cart of bisque pots. 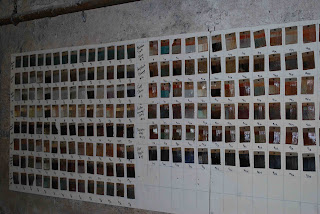 A well organized glaze board gives their students the advantage of seeing the glaze results which are fired to Cone 10 reduction. 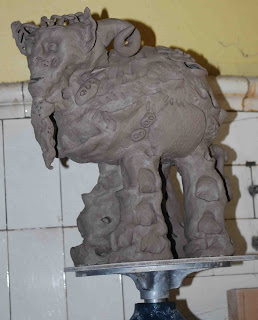 Not sure who this piece belongs to but it sure was a whimsical creature!

They have an L&L programmable kiln which is used primarily for bisque firings. 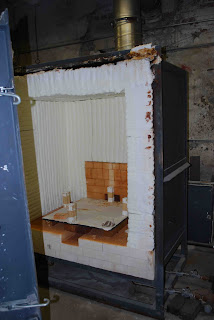 The glaze kiln is a 20+ cu ft gas kiln designed and built by Gerry Wagner.  It is a downdraft with venturi burners firing up through the floor and is fiber lined.  Thanks to Gerry's industrial background, this kiln employs some pretty hefty steel in its construction.  Jeff reports that it is easy to fire, sensitive to adjustment, and very conservative in gas consumption. 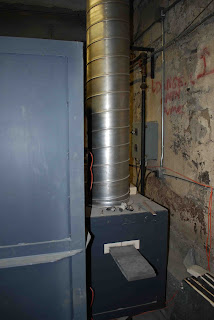 This shows the back of the stack with the damper.  The lined metal stack flows into a 60 foot tall brick chimney that was already in place because of the original boilers that had occupied this space.  I was surprised to hear that the stack draws well with aspirator burners and such a tall, cold stack, but Gerry knows what he is doing and it functions well as both Jeff and the results verify.  Of course, it comes with all of the necessary safety devices. 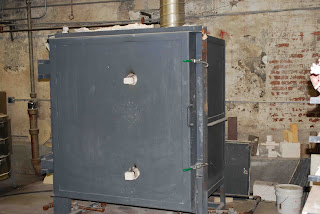 For those who are kiln curious, this is the view with the door closed. 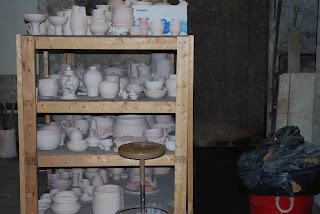 This is some of the bisque ware awaiting glaze. 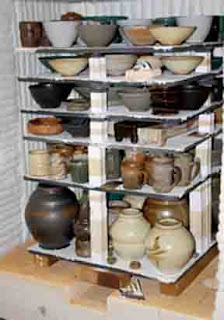 Picture of a fired kiln load.  I did not see many glazed pieces laying around because those are removed quickly after the glaze firing.  Due to the support of the Library and all those involved, it seems that they have created a great asset for the Braddock area residents and the programs are well attended.  From these kinds of programs and dedicated people come our future potters.
You can get more information by clicking on the below link:
http://www.angelfire.com/planet/braddockarts/home.html

At some point in the future I will do a profile of Jeff Schwarz, who is a talented and interesting potter.  Jeff is also involved in the International Ceramic Water Filter project and I will do a post on this process of bringing clean drinking water to areas of the world in need of it.

Posted by Terry Rorison at 6:20 PM